The Mediterranean countries where France is selling weapons 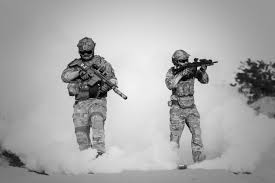 The French ministry of defence has launched a report about the countries where weapons got sold in 2016. The weaponry trade contributed over 1.6 billions dollars for France with Egypt as the 1st African client. Ecomnews Med gives you the amount spent by Egypt, Morocco, Algeria, Tunisia and Lebanon to France in military hardware.

With no any surprises Egypt is the 1st client of France with a bill estimated over 1.5 billions $ on the total amount of 1.6 billions $ that Africa bought from France in 2016. Concerning the purchase order, France sold a total of 793 millions $ to North Africa with 732 millions $ only for Egypt.

But those numbers have to be qualified as Africa is representing only 8.4% of the total Weaponry French supply around the world. In 2016, the biggest transaction for France was the Australian government that bought military hardware for 40 billions $. Next is coming India with 14 billions $, then Brazil with 8.2 billions $, Qatar with 7.4 billions $ and Russia with 1.4 billions $.

Concerning the purchase order, Africa is in a better position than the supplies with 22% of the total French deliveries worldwide. With a total amount of 1.6 billions $ for delivery contract in Africa, Egypt remains the top client for France with 1.3 billions $ imports. Morocco is in the 2nd clients with 127 millions $, next Algeria with 107 millions $.

To give a comparison between North and West Africa, Mali – who’s helped by the French government to fight against terrorism- spent 7 millions $ for weaponry supply to France in 2016. Camerooun -a country at war too- spent 16 millions $, and Senegal 30 millions $ which is nothing compared to the 1.3 billions $ spent by Egypt and the rest of North Africa.

Purchase order from North Africa to France in 2016

From November 2014, France has sold 3 billions $ so far to Saudi Arabia dedicated to help Lebanon fighting against the Hezbollah. Indeed, both French and Lebanese government were scared that the movement (considered by a part of the international comunity as a terrorist group) would succeed to collect a part of the weaponry. Saudi Arabia was engaged to facilitate the transfer and paid a part of the bill.