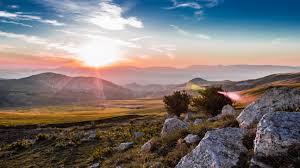 Tourism rate in Algeria has nothing comparable with the neighbours Morocco and Tunisia. This is exactly what foreigners and especially French travellers are looking for!

With only 2,7 millions of tourists yearly, Algeria has difficulties to compete with the more than 10 millions tourists visiting Morocco. But it might be a chance for the country to have avoided the mass tourism policy in the early 1990’s. Indeed Oases, deserts, nature and countryside have never been damaged compared to the rest of Maghreb.

Since 1976, Algeria is a member of the International Organization of Tourism (IOT), but after the 2014 report, tourism national revenue has never reached 10% of the GDP. After the IOT, Algeria represents the 4th African destination for tourism.

Between 2000 and 2005, the tourism industry grew up to 20% mainly because of the « pied-noir »* and emigrants coming back to visit the country after the tragic events in the 1990 decade.

*(A « pied noir » is someone borned in Algeria when the country was under the French authority. During the decolonisation conflicts, the « pied noir » were forced to come back to the mainland France).

Nowadays, French tourism who have nothing particular to be linked to the country are choosing the Algerian destination for his wild nature and the great sense of hospitality by the people. A sign of recovery is that the tourism agency « voyageurs du monde » based in France has opened back again a travel tour to Algeria interrupted for 20 years. The French Ministry of Foreign Affairs has just listed Algeria to normal alertness level instead of high level as it was before. However, the south of the country is still under the high alertness level.

The French TV travellers programs are also playing a role into the Algerian resurgence. They are showing amazing landscape and desert in a pure communion with nature, or the casbah of Algier listed as UNESCO World heritage.

A funny video made by Tolt entitled « don’t go to Algeria » filmed great places to visit in the whole country. The video is a real phenomenon as it totals up 700 000 views on Youtube!