The Morocco’s strategic place during the China-Africa Investment Forum 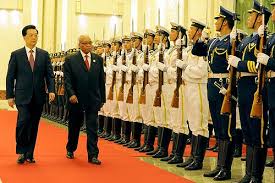 The China-Africa Investment Forum gathered for its second edition on Nov. 27-28 in Marrakech more than 400 African and Chinese trade and investment’s stakeholders. During the conference, Morocco claimed to be a leading partner for the future of China’s economic presence into the African continent positioning itself as “the gateway to Europe in Africa.”

Africa accounts for 15% of China’s investment worldwide and the continent hosts more than 10,000 Chinese companies on its ground making of it an important place in China’s international business. During the last decade, Chinese economic presence mainly developed in Algeria because of oil and Egypt because of the geostrategic importance of the Suez Canal. But the tendency is about to change.

Moulay Hafid Elalamy, Morocco’s trade minister, welcomed his Chinese partners for a meeting on the realization of the full potential of the Morocco-China-Africa partnership in developing infrastructures, reminding Morocco’s economic leadership in Africa.

Morocco is indeed the leading investor in West Africa and the 2nd largest investor in Africa with $ 8 billion investments between 2015 and 2016. Moroccan companies are operating in 27 countries in the continent into different sectors. Moreover, Morocco’s geographic Mediterranean position appears to play an important role in the Chinese business leaders’ perspectives.

The port of Tangier, the 3rd largest hub around the world after Shanghai and Panama, particularly appears to be a strategic space for China whose financial objectives are Mediterranean. Morocco didn’t fail to recall its oriental partner that the port was one of the world’s busiest sea routes connecting the Mediterranean to the Atlantic. Only nine miles separate the port from the European mainland making a foremost space for China’s investments.

Othman El Ferdaous, Moroccan Secretary of State to the Minister of Industry and Investment, also spoke about the ‘fourth road of silk’ gradually emerging in the Iberian Peninsula to Atlantic Africa and to the Gulf of Guinea’s extension.

“How Moroccan investments could be a crucial advantage to the African industry ?” was discussed in the forum. Indeed a platform able to gather international actors could be a leading point to the future of the continent economic development.