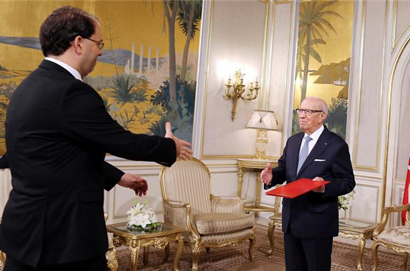 After the European Union slammed Tunisia for being one of the most prone countries to money laundering operations and terrorism funding, prime Minister Youssef Chahed sacked the central bank governor Chedli Ayari and replace him with Marouane El Abassi.

An agreement was made between the President (at the right) and the Prime Minister.

That’s the final straw. Chedli Ayari 84 years old was fired by Prime Minister on the advice of President Beji Caid Esbessi. The decision came after the European Parliament put Tunisia on a blacklist of the most exposed countries to money laundering and financing terrorism. Chedli Ayari was governor since 2012. The decision needs to be ratified by the Tunisian Parliament.

To replace him, Youssef Chahed proposed Merouane El Abassi, an economics professor who was appointed as the World Bank representative in Libya. According to the Wolrd Bank’s website, he also advised Tunisia’s ministries of trade and tourism. Merouane El Abassi holds a doctorate in economics from the Sorbonne University in Paris.

According to Bloomberg, the bad news can come from that the parliamentary vote. Indeed it could delay a billion-dollar Eurobond sale scheduled for next week. «I think the timing is pretty bad, and it sends a very bad signal» said Riccardo Fabiani, an analyst for the Middle East and North Africa at the New-York based Eurasia Group. He added that he «wouldn’t be surprised if they decided to postpone the sale, also given what is going on in international markets».