Does the tourism in Egypt really getting better? 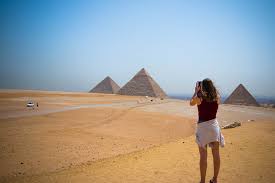 Several numbers announced that tourism was getting much better in Egypt. However the statistics never reached those before 2011 "Arab spring" uprising.

The last report released by the Ministry of Tourism shows that in the first 7 months of the year they registered a rise of + 170% compared to last year. However the attendance rate was divided by three if we compare the rate before 2011 year of the Arab spring uprising.

Nationalities have changed a lot: on one hand Chinese and Russian are coming back, on second hand Americans and Europeans are far less than they used to be.

Before 2011, 800 000 people (especially qualified) were hired. For young educated people the tourism in Egypt was often the best way to get a job into an archaic economical system.

Nowadays a lot from them are thinking about moving to Europe, Canada or United States. A number is relevant to analysis the exodus: the money sent to Egypt around the world rose to 50 % this year.