Israel discovered the oldest human jawbone outside of Africa 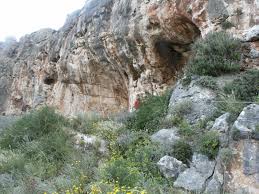 This is a major discovery that the anthropologist from the Hebrew state made! The fossil found in the Misliya cave could date from 177 000 to 194 000 years ago.

The Misliya cave in Israel.

The jawbone discovered in Israel is far older than our species Homo Sapiens. Outside of Africa, the piece could be the oldest one. Recent studies tend to consider the Human evolution and migration in the Old World quite differently. The discovery may change the lecture made by Anthropologists.

The study revealed that the Human ancestors were already using their two feet to walk. But the most amazing thing about the discovery is that the jawbone discovered could have a genetic link to the human bones found out in Ethiopia dated to between 160 000 to 195 000 years ago.

Two cave sites in Israel – Qafzeh and Skhul – have yielded numerous skeletons of early modern humans. The age of these sites would suggest that our species was restricted to Africa for as long as 200,000 years before migrating out of the continent. Other sites with Homo sapiens fossils from Asia and Europe are generally younger than the finds from the Middle East.

The discovery must give another speed to the touristic attendance in 2018.