Netanyahu visit Russia over concerns about Iran’s moves in Syria 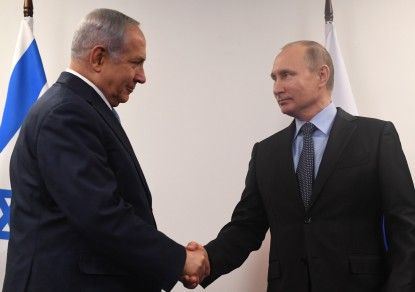 Russia failed to reach semi-finals, so Vladimir Putin is back at work. Israel’s Prime Minister Benjamin Netanyahu visited Moscow on July 11 for talks with President Putin about Iran’s military presence in Syria. It's the third meeting since the beginning of the year between the two leaders.

Over a month ago, Russian media reported that Vladimir Putin invited Benjamin Netanyahu to his country to attend the final game of the football World Cup which will be held on July 15 at Luzhniki Stadium in Moscow, but the Israeli Prime Minister had not made a decision at the time.

Two weeks ago, the Israeli Prime Minister’s Office announced in a statement that he will be going to Russia on July 11 at midday to attend the second World Cup semi-final match between England and Croatia, and will return the early following day. A Kremlin spokesman has also confirmed that Putin plans to meet with Qatar’s Sheikh Tamim bin Hamad Al Thani if he comes to Russia for the World Cup.

The invitation was in fact extended to a long list of world leaders, including the Palestinian Authority president, Mahmoud Abbas. But, there was actually no indication the Palestinian PM and Netanyahu would met face-to-face for substantive talks in the Russian capital.

This will be the third time PM Benjamin Netanyahu meets face-to-face with Vladimir Putin since the beginning of the year to “ensure security coordination and discuss regional developments”.The Israeli PM has made a working visit to Moscow on May 9, being invited to attend the Victory Parade marking the 73rd anniversary of the Victory in the Great Patriotic War.

The previous visit took place on January 29, when the Israeli Minister took part in the events in memory of Holocaust victims at the Jewish Museum and Tolerance centre in Moscow. Lines of communication between the two leaders about Iran’s military presence in Syria have been wide open in recent years.

Benjamin Netanyahu has repeatedly expressed concerns that Iran is seeking to gain a foothold in neighbouring Syria and said that Israel is determined to put end to the Iranian military presence in the country even at the price of a direct confrontation.