In Lebanon, the smell can kill you 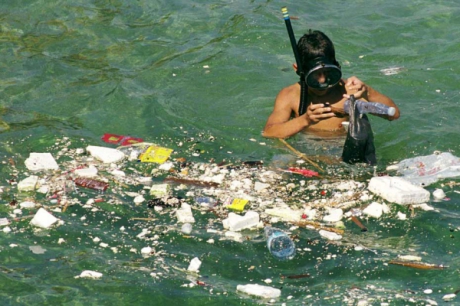 As Lebanon’s summer season gets underway after an atypical June weather, residents and tourists are flocking to the Mediterranean Sea only to swim in water heavily contaminated with toxic levels of chemicals and bacteria. Grey coasts of raw sewage along the Lebanese coastline are now visible on Google Maps.

While the newly appointed government is seeking to reinforce the tourism industry, tourists and locals seem to give beaches the cold shoulder.

The big decline in the cleanliness of the country’s coastal waters has widely tempered the beach mania. “This is nothing new, but it is surely getting worse”, Michel Afram, the executive director of the Lebanese Agricultural Research Institute (LARI) told the Daily Star.

A toxicology report made by the LARI found an alarming toxic combination of materials that is highly harmful to humans and animals, including large levels of mercury, cooper, lead and cadmium, not to mention bacterial contamination.

In social media, hundreds of beachgoers are sharing bloodcurdling pictures of infections due water contamination, with several cases of psoriasis being observed around Beirut, but also in Tripoli, Jounieh, Sidon and Sour.

“There is always something more important”

A June headline from local paper Al Akhbar summed up the situation: “No region in Lebanon is free of pollution: Farewell to swimming”, responding to the 2017 LARI study that found that no water source was free of contamination in Lebanon.

They say that one man’s meat is another man’s poison: public beaches are bearing the brunt of this situation while private beach resorts are welcoming more and more summer holidaymakers, dramatically increasing their turnover. In a country with mounting inflation and unemployment, a large number of residents are simply priced out.

Exorbitant entrance fees keep them out of private beach resorts while pollution drives them away from public beaches. The biggest danger for the average Lebanese citizens now lies in the water they drink and the air they breathe. “There is always something more important, but I feel my life is more threatened by pollution than security or what is happening in Syria”, Mr Afram says.

Meanwhile, the effects of the massive presence of asbestos in cement factories in Northern Lebanon continue to mobilise officials. Mr Fadi Saad, deputy for Batroun, says “People who worked in these factories for a long period of time died of cancer”.