Egypt and China to lift bilateral ties to new heights 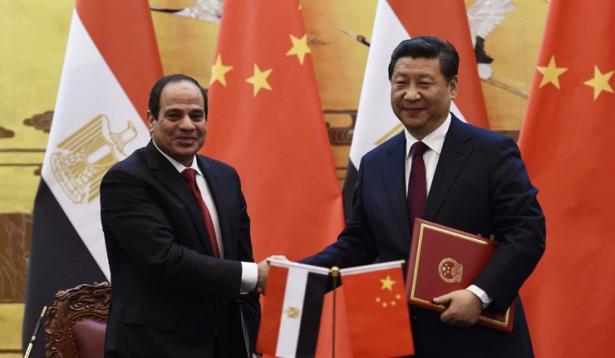 On the sidelines of the China – Arab states cooperation forum, Chinese vice-president Wang Qishan has met with Egyptian Foreign Minister Sameh Shoukry. Qishan has pledged Chinese support to Egypt, saying that his country is ready to enhance cooperation in various fields. For its part, Egypt has thrown its weight behind China’s Belt and Road initiative and pledged to enhance coordination with China on regional peace and development.

President Al Sissi with his counterpart Xi Jinping in January 2016

During a meeting he held with Chinese Ambassador to Cairo, Song Aiguo, the Minister of Industry and Foreign Trade Amr Nassar announced that Egypt’s exports to China hiked 60 percent during 2017, reaching 408 million dollars compared to 255 million dollars in 2016.

The minister said the government is determined to turn Egypt into a commercial and logistic hub to make Chinese products access Africa and Europe. “The current period is the appropriate time to pump Chinese investments into the Egyptian market in light of the political stability in Egypt and strong relationship between the two countries” the minister said.

As for Aiguo, he expressed his happiness with the success of the Chinese economic zone (TEDA Egypt) in attracting several big companies to invest in the Chinese region. The TEDA-Suez zone is planned to span over 7.3 km² with the first phase already completed.

President Xi Jinping announced that China and Arab countries had agreed to establish a future-oriented strategic partnership of comprehensive cooperation and common development. “Strategic” means that the cooperation should be long-term and stable, bearing on the larger picture of bilateral ties. “Partnership” means that the cooperation should be equal footed, mutually beneficial and win – win. The forum is seen as a milestone for China and Arab ties, like opening a new page.

State councillor in the foreign ministery, Wang Yi, said China and the Arab World should seize this opportunity to build a strategic partnership. The goal ? To increase political trust between stakeholders

China will provide loans to help Arab states for economic reconstruction. Beijing is planning to import goods worth over 8 trillion US dollars from Arab countries in the coming five years.