The 11th session of the Astana meeting on Syria 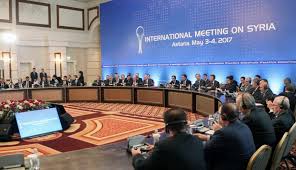 The 11th session of the Astana negotiations on a peaceful settlement in Syria took place on the 28th and 29thof November in Kazakhstan with the participation of representatives of Iran, Russia and Turkey. The final declaration of the 11th session of the Astana negotiations emphasises the preservation of Syria's sovereignty, independence and territorial integrity as well as the achievement of the UN Charter’s objectives and principles.

Russia, Turkey, and Iran made no progress in setting up a constitutional committee in Syria at their meeting on Wednesday and Thursday in Astana, the capital of Kazakhstan, deplored the UN envoy for Syria Staffan de Mistura.

The latter expressed his “regrets” for the incapacity of the parties to break the ten-month deadlock on the composition of the Constitutional Committee. De Mistura added that 2018’s Astana meeting was the last opportunity to make progress and accelerate the establishment of a credible, balanced and inclusive constitutional committee led by the Syrians with the help of the United Nations.

Bashar al-Jaafari: Turkey did not respect its commitments

Syria’s Permanent Representative to the United Nations Bashar al-Jaafari, who headed the Syrian delegation in Astana, stated that the Turkish side did not respect its commitments under the Sochi Agreement: “Turkey had guaranteed that terrorists operating in Idlib would respect the ceasefire, but Ankara did not keep its promise“.

Security, the return of refugees and the reconstruction

The agenda for the Astana discussions between representatives of Syria, Russia, Iran – and a tolerated branch of the opposition – revolved around the issues of security, return of refugees, and reconstruction. The Russian-Turkish agreement on the creation of a demilitarised zone around the rebel town of Idlib concluded two months ago is also at the heart of the discussions.

However, this 11th tripartite meeting is taking place in a more uncertain context for the alliance, following Russian air strikes last Sunday in Idlib province, the first since the September truce. The Idlib agreement has not been broken, but its implementation on the ground is now in question. In the absence of tangible and independent evidence of chemical weapon rebel fire, some analysts see it as a Russian move to force Turkey to get rid of some of the groups it “sponsors”.