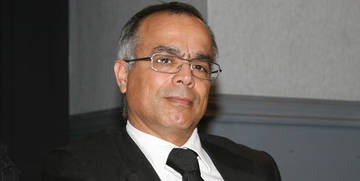 Born in Fes in 1958, Chakib Benmoussa was appointed Moroccan ambassador to France back in 2012. He holds engineering degrees from the “Ecole Polytechnique de Paris” (1979) and the “Ecole Nationale des Ponts et Chaussées-Paris” (1981) and a “Master of Science” from the Massachusetts Institute of Technology-USA (1983).

Mr. Benmoussa held several research, project management and consulting positions before being appointed Director of Planning and Studies in 1987 and Director of Roads at the Ministry of Equipment. From 1995 to 1998, he served as Secretary General of the Prime Minister’s Department with Abdellatif Filali and Abderrahman Youssoufi.

In 1998, Chakib Benmoussa left public positions for the private sector; He worked successively in the SNI Group, as Chairman of Sonasid and Tangier Free Zone, and then as Director and General Manager of the group « Brasseries du Maroc ».

The appointment of Chakib Benmoussa as head of the Economic Reform Committee follows a speech pronounced by King Mohammed VI on July 29th. “We decided to set up the special commission in charge of the development model. We will proceed with its installation at the beginning of the next political year” King Mohammed VI announced in his speech.

In a statement, the Royal Cabinet announced that he received, Tuesday, November 19th, Chakib Benmoussa at the Royal Palace in Rabat to appoint him head of this Commission.

“We have made sure that this committee, by its composition, brings together different academic disciplines and various intellectual sensitivities, by appointing national competences from the public and the private sector.In addition to experience and a requirement for impartiality, these profiles must be sufficiently equipped to understand the dynamics at work in society and to meet its expectations, without ever losing sight of the best interests of the nation “specified the sovereign, pointing out that he expects of this commission that “it fulfils its mandate impartially and objectively by bringing to our knowledge an exact statement of the state of the premises, as painful it may be”.