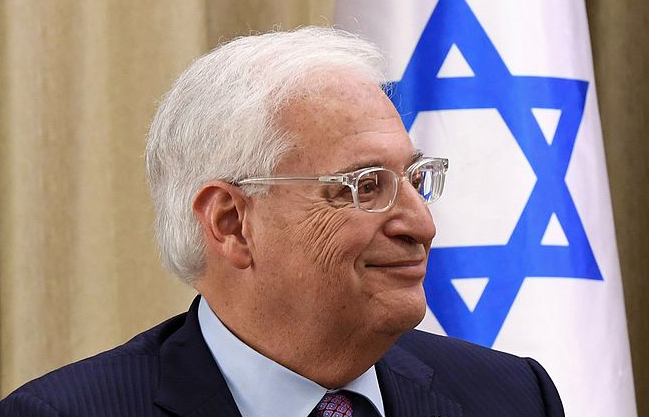 David Friedman, US Ambassador to Israel, has warned the Hebrew state against any unilateral annexation of the West Bank that would undermine the peace plan.

US Ambassador to Israel David Friedman warned on Sunday February 9th the Hebrew state against any unilateral annexation of swathes of the occupied West Bank. He believes such a move would undermine the Israeli-Palestinian peace plan presented in late January by Donald Trump.

Any annexation would jeopardize the American plan

US Ambassador to Israel David Friedman wrote on his twitter account: “President Trump’s vision for peace is the product of more than three years of close consultation between the President, Prime Minister Netanyahu and their respective teams. Israel is subject to the completion of a mapping process led by a joint Israeli-American committee,” he added. “Any unilateral action before the completion of this committee process jeopardizes the American plan and recognition.”

This process, he said later to journalists in Jerusalem, is unlikely to be completed before the legislative elections on March 2nd. Presented on January 28th after having been postponed many times, the American plan confirms Israeli sovereignty over the West Bank settlements and proposes four years of negotiations to achieve the creation of a fragmented Palestinian state with a capital in the eastern suburbs of Jerusalem.

Following this plan, which was rejected by Palestinian President Mahmoud Abbas and the Arab League, Israel had expressed its attention to annex “without waiting” the Jewish settlements established in the West Bank, in particular in the valley of the Jordan and on the north coast of the Dead Sea.

Prime Minister Benjamin Netanyahu; however, appeared to back off on Saturday despite pressure from settlers and far-right members of his coalition to carry out the annexations before the March elections. “We have been waiting for this since 1967 and some would like to make much of an issue of a few weeks”, said the Israeli leader, who assured members of his cabinet not to want to jeopardize American recognition.

Some 65,000 Palestinians and 11,000 Israeli settlers live in the Jordan Valley and the northern Dead Sea, according to the Israeli human rights group B’Tselem. Palestinian leaders believe that annexing parts of the West Bank would undermine the project for a Palestinian state that has been at the heart of the peace process so far.