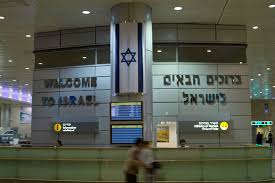 Ioana Isac and her partner Mihai Georgescu landed at Ben Gourion Airport from Romania. As a 3rd million of tourists, Ioana and Mihai were welcomed by Yariv Levin, Israeli Minister of Tourism.

A festive ceremony, red carpet, balloons, and flowers were ready to mark the occasion. The excited couple was accompanied after a little ceremony by the Minister to their awaiting limousine. “This is a special day and historic milestone as we break the 3rd million tourist barrier and set a new all-time record,” said Yariv Levin. Accompanied by Tourism Ministry Director-General Amir Halevi, Yariv Levin completed “ We are set to end the year with an amazing achievement, the likes of which have never been reached since the establishment of the state”.

A result of “huge investment we are making in marketing Israel around the world” according to the Minister. And all this show results and bearing fruit “we have added about $4,85 billion and thousands of jobs to the local economy” concluded the Israeli Minister.

Iona and Mihai enjoyed their stay in Israel and get another surprise when they visited the Tower of David Museum in the Old City of Jerusalem. Indeed a special guide who turned out to be none other than the Prime Minister Benyamin Netanyahu.

Romanian tourism represents a little part of the 3 million tourists with 63,000 Romanian this year, an increase of 57 % compared to 2016. But the leading sources of incoming tourists are the USA, France, Germany, Russia and United Kingdom.