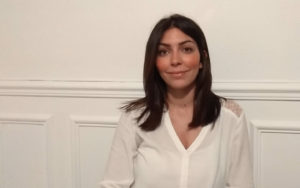 FEMISE recently launched its new series of interviews called « Med Change Makers ».« Med Change Makers » are text and video-based interviews that allow dynamic researchers of the FEMISE network to illustrate how their research addresses a policy-relevant question and how it contributes to the policy-making process in the Euro-Mediterranean region.

Dr Myriam Ben Saad, Université de Toulon (LEAD), Université Paris Sorbonne, FEMISE
FEMISE has just published its research project FEM42-07, ”Complexification of production as a vector of economic transition and the role of short-term policies”, coordinated by LEAD, Université de Toulon. Member of the project coordinating team, Dr. Myriam Ben Saad is one of the young FEMISE researchers who actively participates in the activities of the network. Her work shows the importance of the economic complexity of a country to create more growth and jobs and sketch out clues for the future in the Southern Mediterranean countries.
FEMISE : Your report addresses the issue of the sophistication of productive systems. Why is this issue important for the South of the Mediterranean?
This question is crucial. We observe large economic disparities between countries, largely due to a low level of economic complexity. The latter is sometimes one of the main causes for which economic growth is limited in the Mediterranean. The productive structure of a country is also a decisive parameter, which explains the inequalities of development within a country. Finally, the productive structure can better predict future economic growth. Unfortunately, today we have very few elements on the models and rhythms of sophistication of the productive systems of MENA countries. Our report seeks to remedy that. We try to understand why some countries remain stuck in the intermediate complexity class and make recommendations to enable them to move towards an advanced complexity class that generates more growth and jobs.

FEMISE : The need to develop innovative sectors is arising in the South. What is the best way to proceed according to your results? Do you have success stories to illustrate?

It is important to have appropriate trade policies to address market failures and especially institutional failures that block the competitiveness of exports. We therefore recommend that MENA countries commit themselves to a proactive strategy of export diversification by rethinking their commercial policy to make it a lever for promoting industrial development and structural transformation.

These countries would have an interest in orienting their policies towards national and regional development objectives by improving economic freedom, in particular through administrative simplification laws. This will contribute to the improvement of the business environment in relation to a labor market reform aimed at making it more flexible, transparent and competitive (labor law).

In addition, the development of innovative sectors (support to certain start-ups, to FDI, to the development of free zones or technological business zones) requires a tax incentive policy. This reminds me of the recent experience of a young Franco-Tunisian engineer, installed in a free zone, who managed to transform the production of fine salt into salt pellets. This productive transformation has not only led to the creation of several skilled and unskilled jobs but also to better dynamics and integration of the area.

FEMISE : You stress the need to reform higher and vocational education. What do you propose as concrete solutions ?

A plethora of tools could be put in place. In particular, it would be a question of reinforcing the adequacy of training in relation to new professions, developing partnerships with foreign universities (especially European, Asian or American), but also developing public-private partnerships and using the system of professionalised delocalised diplomas.

FEMISE : Can an improved management of natural resources help to promote growth and employment in the South and how ?

MENA countries have large reserves of natural resources, mostly non-renewable, among the largest in the world. Despite significant commercial exploitation of these resources, MENA countries remain one of the least known and least visible geological regions of the planet. If recent gas and oil discoveries are to be believed, the abundance of these resources would fund the MENA transformation agenda. Natural resources could make the difference if they were transformed.

Transformation can be achieved by implementing a range of “smart” structural policies, i.e using the benefits of natural resources to diversify and make the economy more sophisticated, develop industrial zones based on the comparative advantage in natural resources, improve macroeconomic policies to effectively manage the risks associated with the volatility of revenues from natural resources etc.

FEMISE : In your opinion, what should the Southern States do in order of priority to accelerate this process of making their economics more sophisticated ?

The past few years have been difficult ones for MENA countries, given the seriousness of the challenges facing this region. While the process of structural transformation has been in progress for the last two decades, it is clear that the process is still in its beginning in the region.

– To become more sophisticated, improving the education and training system is the first challenge. The training of human capital, particularly through access to higher education (engineering), could facilitate structural change and productive modernization.

– Improving the quality of institutions and economic and structural vulnerability is the second challenge. In this region, some countries find it difficult to implement measures to transform their productive structures because of persistent corruption, which erodes their capacity.

– At the macroeconomic level, the first step would be to reduce the corporate tax system, especially for local investors. At the micro level, it would be more about launching new development programs and large-scale projects for young people who work in a company and want to invest in it.

Thus, the countries of the region must find collective and not individual solutions to conduct more favorable trade negotiations with their European trading partners, or even better open-up and conquer new markets, particularly the African market. To achieve this, the region will have to find sectorial complementarities to secure the competitiveness and values of the region at the international level.

The report is available for download by clicking here.